FROM LIBRARY: INVESTIGATIONS: DO THEY MAKE A DIFFERENCE? 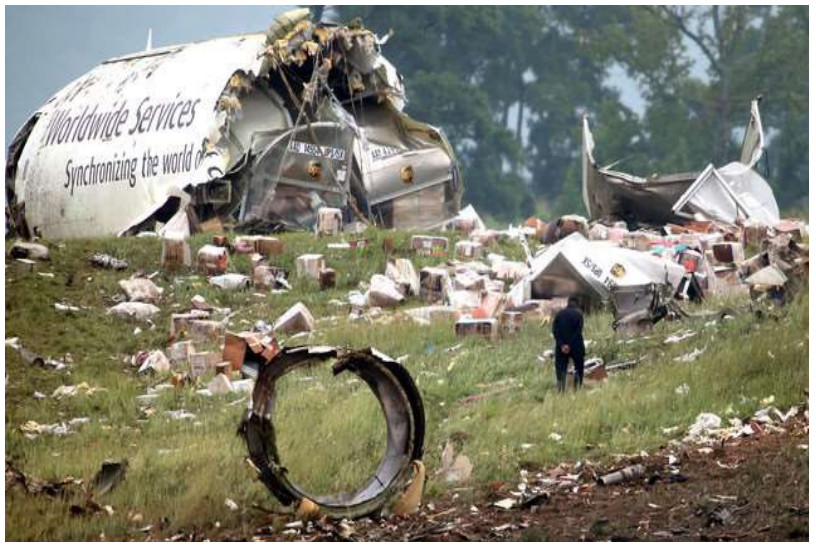 Good morning and thank you for having me! On a week when much of the United States was marveling over the solar eclipse, we are in sunny San Diego. It’s great to be in the sunshine with others who share a passion for air safety investigations.

The theme for this year’s ISASI seminar is: “Investigations: Do they make a difference?”

Well I certainly hope so, because I’ve been going to accident scenes since I was 17. On that day, I heard about a plane crash on my car radio, and decided to try to find it. As I approached the crash site, I saw the coroner and decided to tuck in close to him. As the law enforcement officers on scene raised the yellow tape and cleared the way for him, I ducked in with him.

Robert L. Sumwalt was sworn in as the 14th chairman of the National Transportation Safety Board on August 10, 2017, after being nominated by President Donald J. Trump and confirmed by the U.S. Senate. Mr. Sumwalt began his tenure at the NTSB in August 2006 when President George W. Bush appointed him to the Board and designated him as Vice Chairman of the Board.

In November 2011, President Barack Obama reappointed Mr. Sumwalt to an additional five-year term as Board Member.

Since joining the Board, Chairman Sumwalt has been a fierce advocate for improving safety in all modes of transportation, including teen driver safety, impaired driving, distractions in transportation, and several aviation and rail safety initiatives.

Don’t ask me how this happened, but on the way home, I drove by the airport and stopped at a flight school and signed up for flying lessons. So, yes, I sort of got into aviation by accident.

In college, instead of studying whatever I was supposed to be studying, I would spend countless hours sitting on the floor of the government documents library, reading NTSB accident reports. As I read those reports, I even had a secret dream that one day I would be a Member of the NTSB. But, like many dreams, I never really believed it would happen.

I also never imagined that I would have the opportunity to address an international audience of preeminent air safety investigators – let alone be the Chairman of the agency that produced those reports that I read as a college student.

When I began flying for an airline in 1981, there was still some distrust of big brother and companies using Flight Data Recorders and Cockpit Voice Recorders (CVRs) to “spy” on pilots.

Look how far we’ve come. For years now, not only are CVR’s in every airline cockpit, but now, airlines and several business aviation operators routinely monitor hundreds of parameters from flights to look for exceedances or deviations. And, to top it off, these operators actually share their data with government and industry to look for potential problems so the problems can be addressed before they lead to accidents. It’s a system that is built on trust. Honestly, I believe this is one of the big reasons our aviation safety record has gotten as good as it is in the US.

As mentioned, I started reading aircraft accident reports more than 40 years ago, and I’ve been actively involved in the aviation safety business for more than 30 years. During that time, I’ve developed the belief that an effective, credible investigation needs three critical elements.

As I believe many of you know, when the NTSB was established 50 years ago, it was administratively part of the US Department of Transportation. In 1974, however, Congress moved NTSB completely outside of DOT and made it independent of all other agencies. Although I’ve understood why Congress made that change, it was only last week – while working late in my office preparing this speech – that I located the official records that more fully explained what prompted those changes. It was truly a fascinating read.

According to the Senate Committee on Commerce’s report, “The Board was intended by Congress to be independent so that it would be free (and feel free) to criticize activities of the Federal Aviation Administration, where its investigations indicated that the FAA was at fault.” [1]

“In retrospect, the arrangement specified in 1966 has not worked out well,” said the Senate report.

The Senate report noted that in 1970, the then-FAA Administrator and Deputy Administrator tried to pressure the NTSB to rewrite the draft report of a mid-air collision that occurred the year before and claimed more than 80 lives.

According to the report, “The Board planned to point out the fact that the FAA had not acted upon many of [the] recommendations [that may have prevented the accident].” The Senate report asked rhetorically: “How can a Board retain independence if its members are threatened if they vote to support comments critical of DOT?”

“The most important single aspect of the National Transportation Safety Board must be its total independence from those governmental agencies it oversees in regard to their transportation regulatory functions. If the Board is under pressure from any administration to pull its punches or to tone down it’s reports or to gloss over Government errors in transportation safety, then its watchdog function has been fatally compromised” stated the Senate report.

So, my charge to you is to ensure your investigations are free from external pressures. The traveling public deserves independent and objective investigations.

The second critical element of effective investigations, in my opinion, is to keep your eye on the goal – prevention. Remember that according to ICAO Annex 13: “The sole objective of the investigation of an accident or an incident shall be the prevention [emphasis added] of accidents and incidents. It is not the purpose of this activity to apportion blame or liability.”

As soon as the investigation starts seeking to apportion blame or liability, the focus on true safety improvements can get derailed. Granted, there are those who are in the business of litigation – and that’s not a bad thing – but for air safety investigators, remember that we are not in the business of pointing fingers, laying blame, or assigning fault. Our goal is the prevention of future mishaps.
Prevention of future accidents is the core component of an investigator’s mission; a thorough investigation which determines the cause of an accident is of little value to the public if the knowledge does not prevent future accidents. Successful adoption of safety recommendations is the forward-looking fulfillment of the work we all do.

The third point critical element of effective investigation is that that we must not be satisfied at superficial findings. We must look for the underlying issues. If we focus only on the obvious error, we may miss valuable accident prevention opportunities because systemic flaws may remain undetected and thus, uncorrected. It is one thing to say a person committed an error. It is quite another to try to understand all of the factors that may have influenced that error. Where was the rest of the system that should have prevented a simple error from being catastrophic? If we are really interested in improving safety, then we must look at the entire system, not just focus solely on the front-line personnel.

In my office, I have the framed cover of ISASI Forum magazine. On the cover, it states: “The discovery of the human error should be considered as the starting point of the investigation, not the ending point.” I placed this magazine in my office to serve as a reminder of the importance of going beyond simply stating that someone committed an error. We need to answer why the error was made.

So, the three points are: maintaining independence and objectivity; keeping focused on prevention, and; seeking underlying issues.
As I head toward the ending of this discussion, allow me to put a different twist to the theme of this conference. Instead of asking if investigations make a difference, I’d like to put the focus on the dedicated men and women who actually conduct air safety investigations. The question now becomes: “Investigators: Do they make a difference?”

Sometimes we gather wisdom from unexpected places. A few years ago, I had a visit from a 15-year-old. His grandfather was a renowned meteorologist who was a leading researcher in windshear and microbursts. The grandson was interested in the NTSB and we gave him a tour of our labs, and we introduced him to a few of our investigators. A few weeks later, I received a handwritten letter from him. Let me share a few of his thoughts:

In October, you gave me, my father, and my grandfather an inside look at the NTSB. I just wanted to write you to let you know how much that visit has impacted my life. Getting a more focused look at what the NTSB is all about has impacted me even more to pursue a career in aviation, and possibly aviation safety…..

Most children think of Superman and Batman when somebody says ‘Hero.’ To me, a ‘Hero’ is someone who does all of their best efforts to make sure everybody is safe from harm. To make sure a recently married couple may enjoy a honeymoon. To make sure our USA team can compete. To make sure our soldiers can return home safely to their families for Christmas. These are all the things the NTSB does. To make sure we can travel safely.

In my eyes, that is the most incredible thing anybody can do: Sacrifice their time for the good sake of others. That is something I want to be a part of….

Let me leave you with one final thought. I, like many of you, have been doing safety work for a long time. I know there can be trials and tribulations. I know there can be disappointments, setbacks, frustrations. Perhaps sometimes you feel your work is all for nothing.

And, why do I suspect you may sometimes feel that way? Because, as one safety professional to another, I know from experience that when we care about something as much as we all do, it can be frustrating when we feel our input is ignored; when we know there is more that can be done; when we see things that should be changed, but aren’t; when we feel others really don’t care.

You may occasionally ask yourself: “Is it all worth it? It is really worth all of the time I have spent on these safety initiatives?”
Well, to answer that and keep it all in perspective, one of my favorite inspirational sayings is: “And whoever saves a life, it is considered as if he saved an entire world.”

In other words, to make a significant difference, you don’t have to solve world hunger or find the cure for cancer. You only need to keep one person from getting into trouble in an aircraft. If you have done that, it is as if you have saved an entire world. Admittedly, the paradox is that you probably never will be able to fully appreciate just what you’ve done. You will probably never receive the direct satisfaction of knowing that you have helped someone.

But let me assure you … the work you are doing… it does matter. It does make a difference. It is important. And yes, it does keep people from dying.

So, as one professional air safety investigator to another, thank you for your tireless efforts. I guarantee, your work is saving an entire world.

Thank you and keep up the great efforts!

1. Transportation Safety Act of 1974. Report of the Senate Committee on Commerce Together with Supplemental and Additional Views on S. 4057. Senate Report No. 93-1192. September 30, 1974. Washington, DC: US Government Printing Office.

WRITTEN BY: Robert L. Sumwalt, chairman of the National Transportation Safety Board