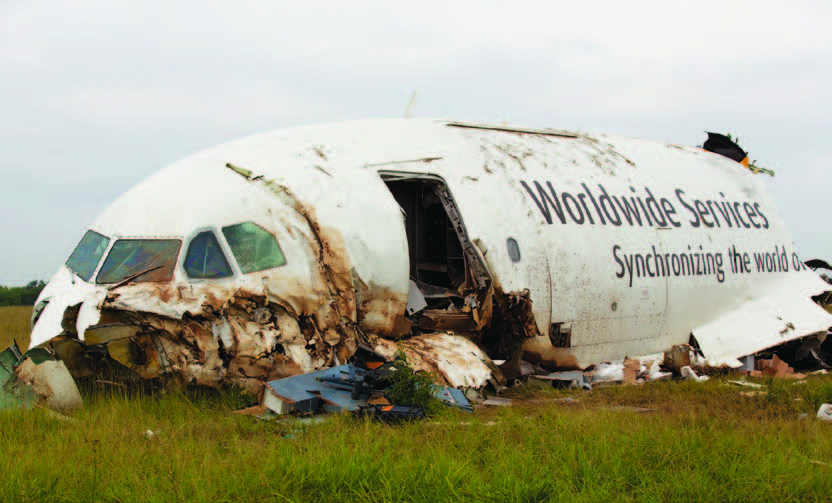 This is the first of a series of articles covering airmanship.

Some recent incidents have highlighted that perhaps, with an over-reliance on automation, some basic airmanship skills may have deteriorated with a resultant risk to the safety of commercial aviation. I should stress that what I am focusing on in this article is not manual flying skills, but the other skills that should be applied whether in automatic or manual flight, and particularly during an approach.

In a recent incident a large commercial airliner descended to 400ft AAL 8 miles from the runway threshold. In another incident a large aircraft descended to 170ft rather than 700ft during an approach which apparently frightened the occupants of a hotel! In both of these incidents the aircraft carried out a go-around but in March 2015 an A320 at Halifax Nova Scotia (figure 1) impacted the ground 740ft before the runway threshold when the go-around was commenced too late to avoid ground contact.

In August 2014 there was a fatal crash (Figure 2) when a cargo aircraft struck the ground approximately 3,300ft short of the runway (Figure 3) threshold during a localizer non-precision approach

Both accidents and the two recent incidents raise a concern about what the pilots were looking at and doing at this very critical phase of flight. To descend 2,000ft below the normal height expected during an approach, as occurred during the first mentioned incident, with a serviceable radio altimeter correctly indicating the proximity of the ground and the descent continuing is cause for concern.

Airmanship is a term not often used nowadays and the term Situational Awareness has partially replaced airmanship when discussed in such forums as training.

From the very first flight by the Wright brothers in 1903 they soon learnt that certain things looked and felt right, while other things did not.

Wikipedia has quite a good definition of airmanship;

“Airmanship is skill and knowledge applied to aerial navigation, similar to seamanship in maritime navigation. Airmanship covers a broad range of desirable behaviors and abilities in an aviator. It is not simply a measure of skill or technique, but also a measure of a pilot’s awareness of the aircraft, the environment in which it operates, and of his own capabilities.

Airmanship can be defined as:

The three fundamental principles of expert airmanship are skill, proficiency, and the discipline to apply them in a safe and efficient manner. Discipline is the foundation of airmanship. The complexity of the aviation environment demands a foundation of solid airmanship, and a healthy, positive approach to combating pilot error.”

Let us look at some airmanship examples by conducting a little test related to a normal 3° approach path to a runway. The airfield elevation is 2,200ft.

An approach is a particularly busy period of the flight which can be challenging in adverse weather conditions and therefore discipline (as highlighted in the Airmanship definition) is paramount. Standard Operating Procedures (SOPs) help to maintain discipline by providing the safe procedures to follow. Sometimes not specifically mentioned in SOPs is the assumed discipline of airmanship where the pilots monitor the approach profile and know what heights to expect at certain distances from the threshold.

Quite often SOPs mention an Approach Fix as a crosscheck point or a distance from the threshold when the radio altimeter indicates 1,000ft. These are 2 examples but actually the height/distance to go crosscheck is ongoing and starts many miles from the airport as an indication for energy management. If we consider the first mentioned incident then at some point the radio altimeter started indicating (2,500ft RA) and this must have been well in excess of 10 miles from the threshold. This may not be unusual if a level segment of 2,500ft AAL is part of the approach. The 1,000ft RA indication however must have occurred at about 10 miles from the threshold, approximately 6.8 miles early, which is unusual.

On descent, once the radio altimeter is “alive”, pilots should include it in the instrument scan for the remainder of the approach, to ensure that radio-altimeter indications are not less than the standard or average minimum obstacle clearance heights.

Unless the airport features high close-in terrain, the radio-altimeter reading (i.e. height AGL) should reasonably agree with the height above airfield elevation (i.e. height AAL), obtained by subtracting the airport elevation from the altitude reading when using QNH.

The radio altimeter is not, however, an easy instrument to monitor; its indications depend on the terrain being overflown, it does not fit naturally into the instrument scan, and any monitoring procedure that depends on pilot callouts based on the radio altimeter suffers from the same potential for high error rates as for those that are based on cross checking altitudes against DME. However, “automatic” callouts based on radio altimeter indications are extremely reliable. This is the basis for using the 1000ft RA automatic callout as a gross error check of the aircraft’s position relative to defined instrument approach segments.

Unless the airport features high close-in terrain, the 1000ft RA auto callout should occur in the final approach segment, approximately 2-4 NM from the landing runway threshold. In preparation for any approach, pilots must determine both the source of “distance from landing runway threshold” information that will be used, and if local terrain is likely to cause an early or delayed auto-callout of 1000ft RA.

Additional guidance from a Training Department;

Radio-altimeter indications should not be less than the following obstacle-clearance minimum heights:

Given all of the above what lessons can we learn and apply when carrying out an approach?

Depending on aircraft type you might find it useful to have the runway as a fix and then create 5 mile and 10 mile range rings to act as a crosscheck of altitude and distance. These 5 mile and 10 mile distances can then be included in the approach briefing as expected altitudes which becomes very relevant when the airport elevation is high.

All of the above has hopefully reminded you of a few points of Airmanship that you may have forgotten.